skip to main | skip to sidebar

Snow and ice here-pre thanksgiving.
Mid October,we opened up the gardens to the livestock,who ate and ate and even developed a taste for the daikon radish-tops and bottoms!  They even eventually ate the beets that I planted late september-too late.  As the donkeys and sheep headed strait out to the gardens after their morning grains,I jjust pilled short of much needed  fall disc harrowing .But/and as friday is projected to be warmer,I will disc then amd lime.  Oh well,sad and sorrow for animals regarding harsh Nortth Country winters.

keep thinking'this is the last crop of beets for 2015' and/but they keep a growing and I keep hauling them back to the barnhouse and preparing them for borscht..  and the daikon radish is either going to winterkill  for soilfeed or I may bring even more up to the barnhouse for pickling,etc.
at 8:38 AM

The growing season in 2015 has been so scrambled that our veggies were necessarily planted on Northern Vermont Weather Time.  Those who pushed too early lost their tomatoes to blight, and the corn in many areas is stunted & late compared to previous years.  In planting late we have some great cool-weather plants, and the crows helped us to give up on corn (35 stalks are coming along, of over 2,000 planted).  This weird weather is also making amazing weeds--threatening to smother what we've chosen to plant, in a fierce battle for resources.

But other things are growing this year too -- Our Geese (3 of them -- they did sitting shifts on the pile of eggs) decided to sit for weeks on end and the result was our first ever hatched geese -- 1 Chinese goose, and 1 Toulouse Goose.  Now another goose has decided to also try.  Like our sheep born last year, I erred about this goose's gender, and presumed this goose to have become some predator's meal weeks ago, never imagining it was a female sitting on eggs.  Then suddenly, she appeared last week for 10 minutes of ravenous eating, only to disappear again somewhere (we've searched plenty), and then yesterday she suddenly appeared again looking thinner and somewhat frazzled.  We have a guard donkey (Bobo), and the male Chinese Goose is a guard goose, but young momma has chosen to be away from their protection.  How she has avoided becoming food is a great miracle.  I eagerly await the arrival of a new gosling, as her persistence is formidable and her courage great.   What a beautiful growing season we're having up here.  - Stephanie 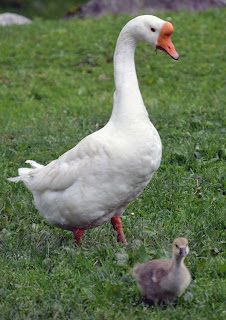 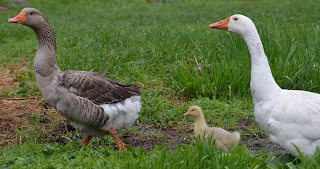 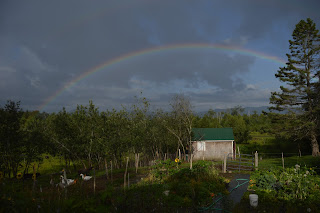 a heap of sheep

Feb 20: Our first baby sheep (2) are born on this day--to proud parents Mrs Mavis Bourdelle-Sheep and Mr Romeo Bourdelle-Sheep...  Sparky lived & thrives to this day (he's the one with the long tail).  For about a year I thought he was a she, until the shearer came & informed us otherwise.
at 2:29 PM


Doin' some conscious uncoupling from agribusiness--smarter, quicker...all business.  Getting more and more done in less time, and faster, faster, faster.
at 10:17 AM